BACK TO WORK: RAISE YOUR HAND IF YOU’RE READY!

Show of hands. Who thought we would be dealing with a global pandemic, an economic meltdown AND the biggest civil rights awakening since the 60s that has changed attitudes both societally and corporately not just here but around the world?

For those who still have their hands up, you can have my forecasting job because you have one heckuva crystal ball.

As we watch what happens, we at ARE lean into these challenges with a commitment from our small but incredibly dedicated and extremely talented staff. Our programming has been at the forefront of saluting frontline heroes and helping those who have sacrificed in defense of this nation. And, since we believe science provides the answers we need, programs that explore the future and how research, technology and the search for facts and truth continue to be part of our DNA. To stay physically distant, but socially engaged, Al Roker Entertainment took part in a number of virtual conferences and gatherings (more below).

We’re lucky. Both Deborah and I have had the opportunity to work from home, broadcasting on both NBC and ABC respectively, usually with son Nick helping out (Nick also shoots and adds commentary on our homemade, shot-on-an-iphone series What We’re Cooking from our quarantine kitchen). 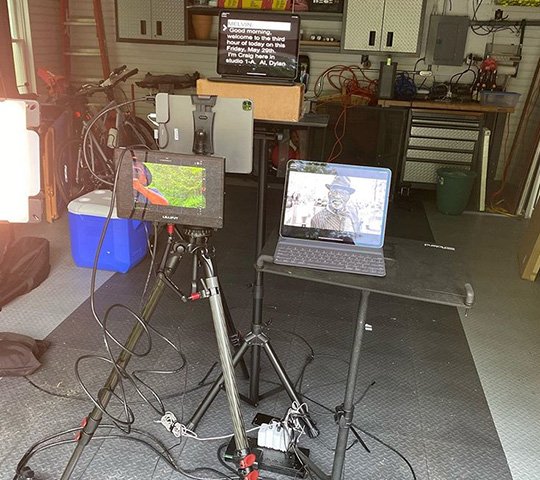 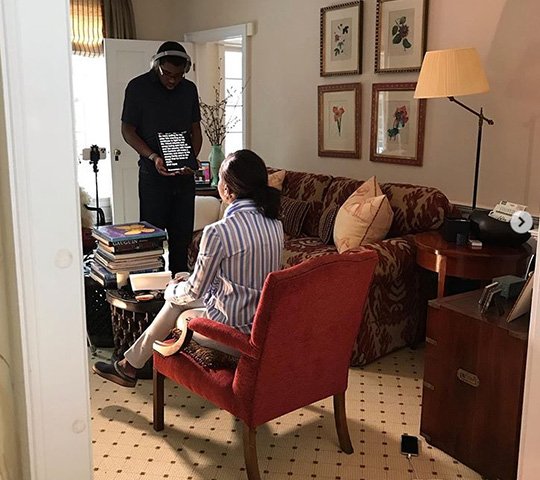 Now, here’s a look at what we’re up to. Oh and to those that still have their hand up, can we talk about your stock picks?

These last few months brought a societal sea change to the way business is conducted, forcing every company to look at their responsibilities as corporate citizens. The recent Black Lives Matter street protests have forced governments and businesses to re-think how they treat BIPOC, and even more recently, a global Facebook advertising boycott has forced brands to evaluate the optics of placing their name and products on a platform that allows questionable content. And all of this is playing out during a global pandemic. Business as usual? Hardly. As the Harvard Business Review surmises,  We’re Entering the Age of Corporate Social Justice. Now more than ever, business needs to step up the good things they do and message accordingly. Research has shown that companies with effective Corporate Social Responsibility (CSR) programs are more profitable than those that aren’t. But as we are seeing from the Facebook fallout, in addition to needing to own their narrative, brands and companies must also clearly communicate it using a variety of distribution methods, both linear and digital as well as through direct-to-consumer and B2B channels. The need for granular audience data has never been more crucial, along with effective storytelling and ergo, the measured placement and activation of this messaging. As HBR points out, “consumers and other stakeholders want companies that see social good as a necessity, not just a marketing strategy.”

Quick.... Without Googling, How Big is a Gigaton?

As global pandemic concerns were playing out, the timing was opportune for a discussion on Imaging a Better Future at the Social Innovation Summit, presented by Landmark Ventures. Al spoke with Kathleen McLaughlin, Executive Vice President & Chief Sustainability Officer; President, Walmart Foundation, Walmart to see how the largest global retailer is handling environmental waste and greenhouse gases generated within their supply chain as they operate 11,500 stores in 27 countries. Kathleen discussed Project Gigaton, a WalMart initiative implemented to avoid one billion metric tons (a gigaton) of greenhouse gases from the global value chain by 2030. 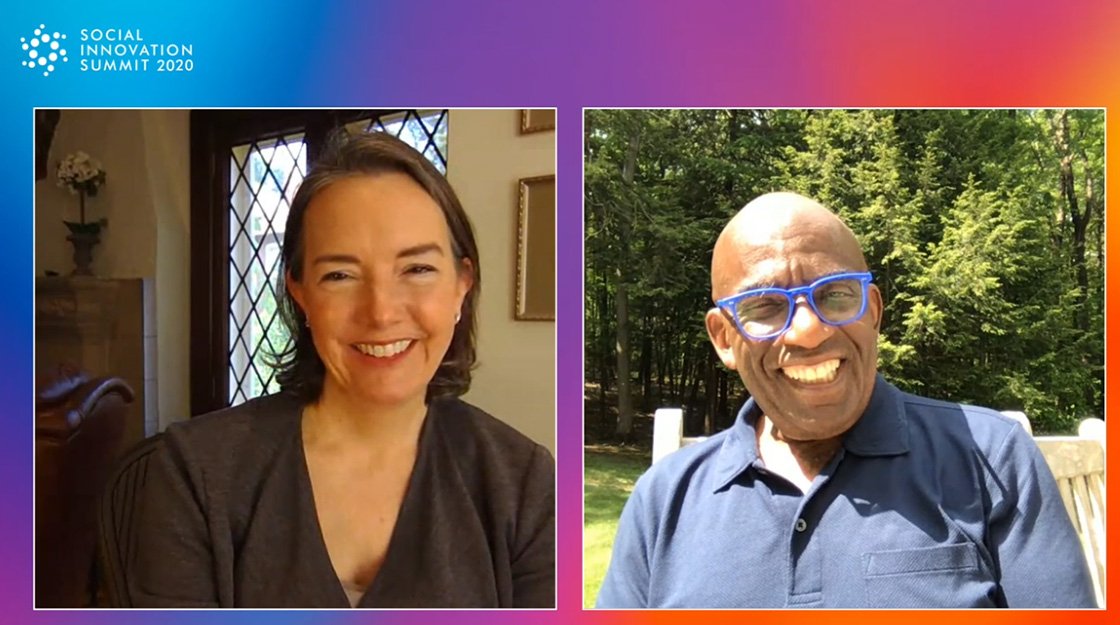 Kudos to Aaron Price and the NJ Tech Council (recently rebranded as TechUnited:NJ) for recognizing that Al Roker is more than just that friendly face you see on morning TV. As an entrepreneur, Al started Al Roker Entertainment, inc in the early ‘90’s to produce cooking shows and has since grown the company to also create and produce compelling content for brands and advertisers, notably in the cause-marketing space. Al and Aaron spoke in May about this journey, and why it’s vital – now more than ever – for brands to trumpet the good things they do and to own their narrative.

Not All Heroes Wear Capes!

Did you miss our inspirational salute to healthcare workers,
“SIDE BY SIDE: A CELEBRATION OF SERVICE”
presented by Northwell Health? 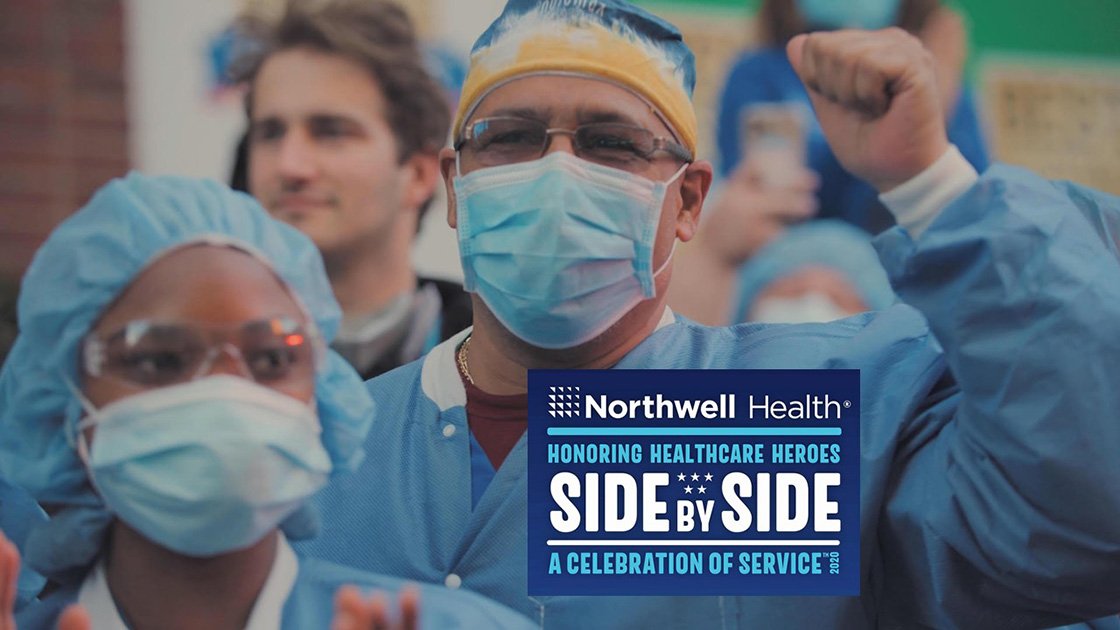 Al Roker Entertainment was honored to produce this heart-tugging TV event celebrating the unflappable medical workers and military heroes working on the front lines of the global pandemic in the New York City epicenter. Originally airing on NBC4 New York on Memorial Day, you can now watch the entire program here. Please share it with someone who you know in the medical field. (Spoiler alert: grab the kleenex).

Last fall, Al Roker Entertainment was thrilled to work with Vets2Set on an interstitial content shoot for the Musial Awards. Vets2Set is a group looking to create production assistant job opportunities for U.S. military veterans assisting on shoots in advertising, TV, film and digital media, which in turn will help open the door to careers for these military heroes in the production industry. We worked with Talaysia Gordon, a veteran of the US Navy hoping to work in digital and film production. As the industry returns to on-location and studio shoots, consider Vets2Set for your next production.  More here. 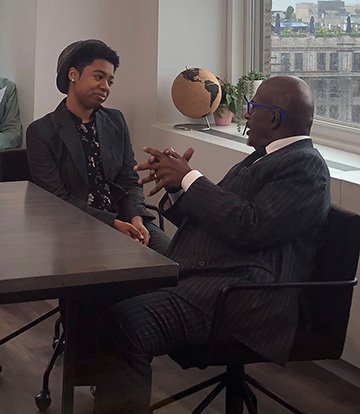 A Conversation With Christopher Young - ARE Executive Producer

(Editor’s Note: This conversation took place prior to the pandemic lockdown.)

Producing television programs is fraught with many challenges and hurdles – from creative development to funding and distribution. Knowing where content will live (and who is publishing it) typically determines the narrative style employed by the Show Runner.

At ARE, we are currently in production on a science-based, branded entertainment piece. This six-episode linear TV series takes a few not-so-subtle digital cues from the techniques and narrative approaches that dominate today’s mobile-first YouTube and TikTok-infused landscape. 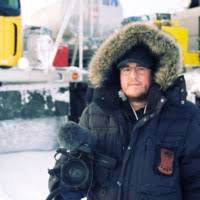 Executive Producer, Christopher Young (Nat Geo, Discovery) is helming this innovative program that, on first blush, could live on both linear and digital platforms. This is by design.

Chris made the leap into film after getting a degree in science from MIT. He later graduated with his MFA at a time when media was transitioning to digital. With his interest in science, he pursued a career telling narrative science stories using film but with advances in high end production tools – including Avid and advanced portable cameras and gear – video storytelling became more democratized and accessible for him and many other media practitioners. During these days of transition from what was (and to some, still is…) traditional media to digital and social video – and within his tenure as a long form content producer at the World Science Festival – Chris became acutely aware of how online platforms, such as YouTube and Facebook, were influencing both the production and activation. Digital had become the “thing” and Chris liked what they were doing.

“It was very fresh and personality driven but they were limited by their small budgets. They had to get creative with that and experiment with new ways to still tell the story.”

Chris noted that this style of producing inspired his current long-form branded content project with ARE, dispensing with the “traditional” long form format of B-roll and talking head documentary style and embracing the immersive journey style of storytelling.

According to Chris, “I watched a lot of YouTube. We developed the idea of having six different hosts (one for each episode) from that. Our hosts were established on YouTube and some had really big audiences. But more importantly, we saw when you have someone with a personal connection to the subject matter and they can relate to the topic and the people (scientists) because they are one too, you get a nice dynamic that you don’t get with just a host.”

And this is why the digital connection is so crucial to building the narrative for long form linear.

“The authenticity of having a real person as the character you want to go on a journey with, and not a “host,” – someone you can relate to is almost a throwback to an earlier immersive style that people started getting away from.

Walk A Mile in His Shoes

We work with some highly talented creatives including Jason Watt of Watt Pictures. Jason has produced factual and lifestyle programming for numerous networks. In April 2020, Jason interviewed Cameron Hershey– a travel nurse who answered NYC’s call for front line healthcare workers during the height of the pandemic in the city: the result is this short documentary film.

“A Walk With A Nurse” is a tribute to all front line workers, and in particular nurses. The World Health Organization designated 2020 “The Year of the Nurse and MidWife”) – and there has never been a year when our world needed nurses more than this year. We hope and plan to bring more stories of nurses and the pandemic to different screens in the near future. Everyone donated their time to make this tribute.

Here’s something fun – click here or the image below for a video sneak peak at Al’s book photo shoot for his forthcoming book, You Look So Much Better In Person – True Stories of Absurdity and Success. 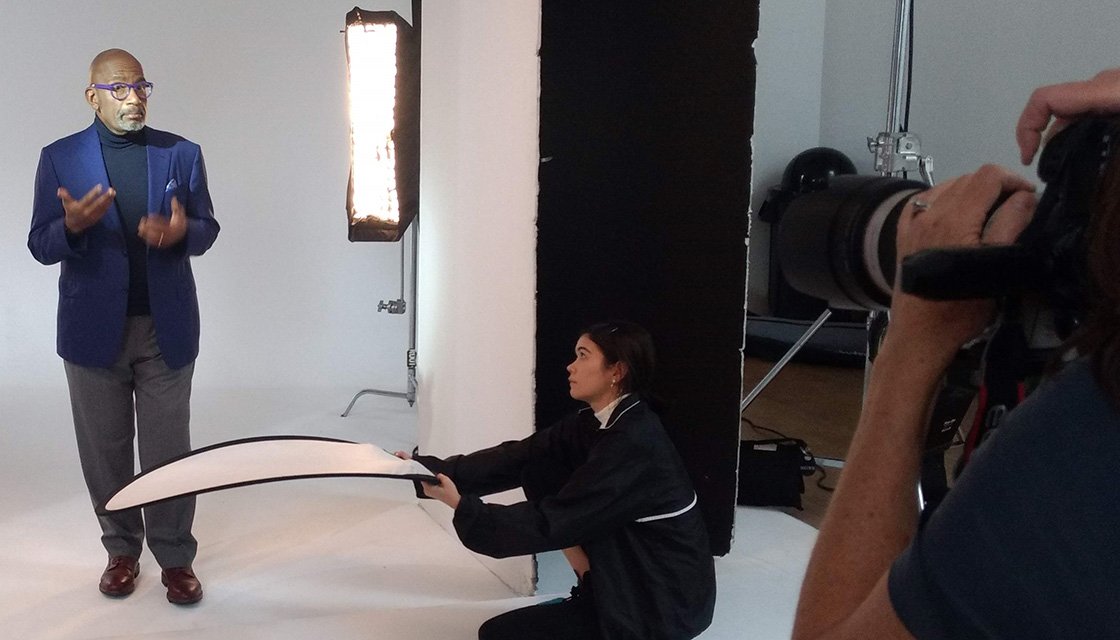 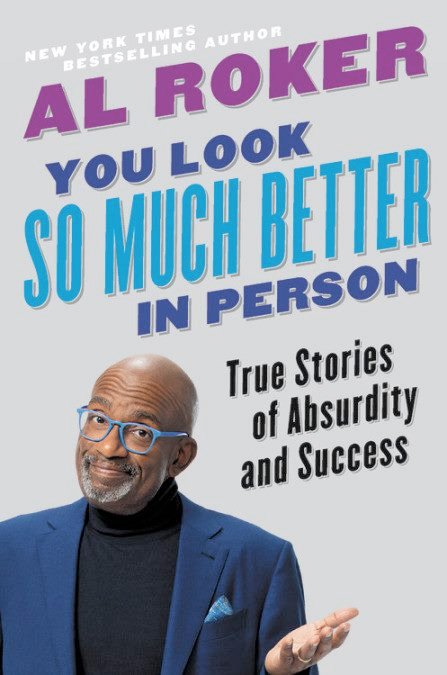 Packed to the brim with cackle-inducing and cringeworthy behind-the-scenes insights and observations from over four decades in the media, this book reminds us all that long-term success in our personal lives and our careers is just within reach. You Look So Much Better in Person, Al Roker’s 13th book (!) from Hachette, will leave you laughing out loud and inspired, and feeling not alone amidst life’s best and worst moments.  More info and to pre-order click here

Thank you for the enthusiastic response to our inaugural edition of “In Focus by Al Roker” launched last month. Here at ARE, we continue to develop and strategize – usually over Zoom – both long-form television programs as well as cause-marketing content for brands and non-profits. We are grateful and appreciative of our production partners during these tenuous times. Thanks for keeping the creative juices flowing and please, stay safe. And if you want to reach out to us, we’d love to Zoom with you, too! 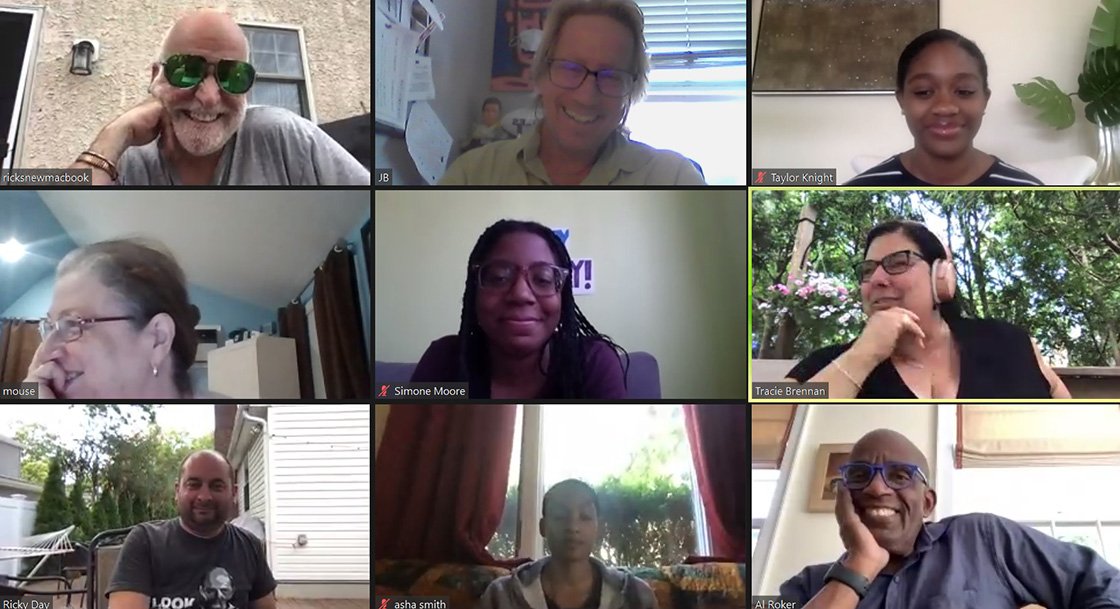 Drop us a line at marketing@alroker.com

Did you miss a previous IN FOCUS with AL ROKER Newsletter?

Check them out here 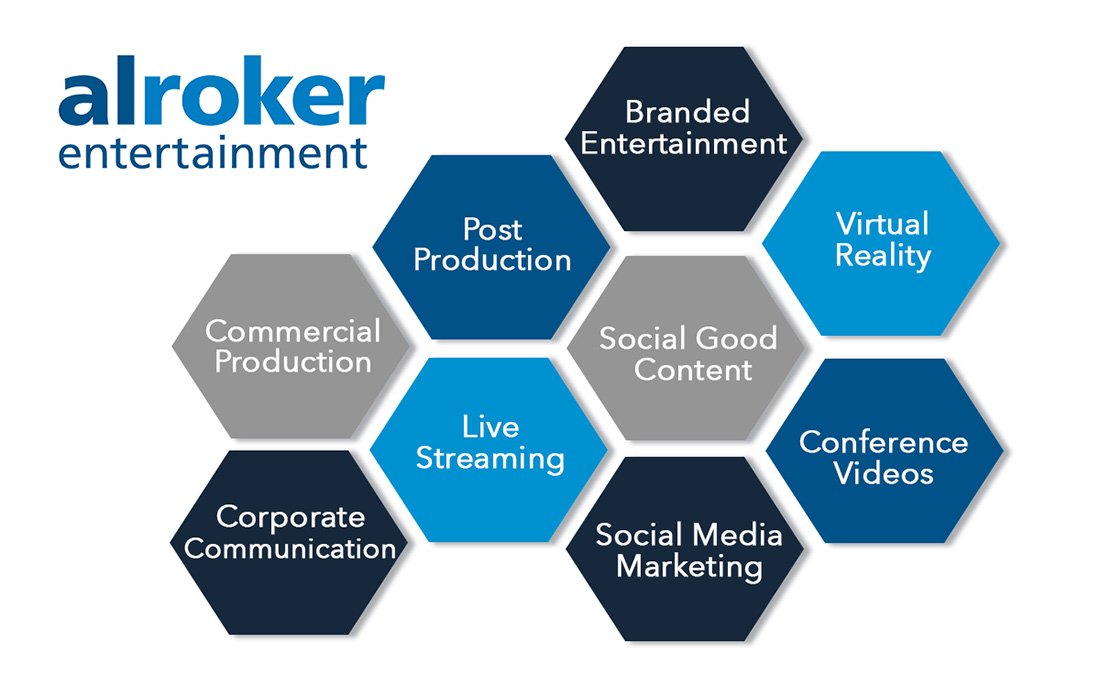